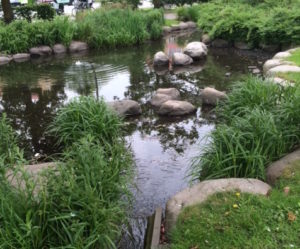 Precipitation extremes are predicted to increase in magnitude and frequency due to the impact of climate change. This poses a challenge to the urban drainage systems, as they will have to be able to cope with increased stormwater volumes in the future. (Zhou, 2014). This project focus on the area of Augustenborg in Malmö in southern Sweden, where an open stormwater system has been constructed to improve the areas capacity to handle heavy rainfall events.

In this project, the hydraulic modeling software MIKE FLOOD by DHI will be used to develop a coupled 1D-2D model of the Augustenborg stormwater system. Flow in the pipe network, ow in the drainage channels and runoff from effective impervious surfaces is modeled in the 1D model. Overland ow and infiltration on previous surfaces is modeled in the 2D model. The two models are dynamically coupled, allowing for ow ow to be exchanged between the two models throughout
the simulation. The model is calibrated against ow measurements from the Augustenborg area. The model could be calibrated in 3 out of 4 measurement points. The results show that runoff is accumulating on surfaces intended to be flooded. The model can thus reproduce ow in the drainage network as well as overland flow, and can produce pedagogical inundation maps. The developed model can be used for future studies of the Augustenborg area.