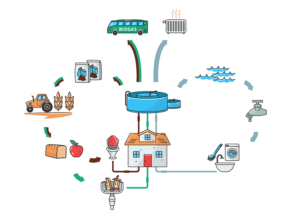 The Swedish environmental protection agency (SEPA) has been working on more stringent laws in regards to handling of wastewater sludge since the 1990’s. The most recent proposal includes goals for nutrient recovery, of phosphorus and nitrogen, from wastewater. Similarly the Swedish Generation goals aims for reduced emissions of greenhouse gases. Swedish conventional management of domestic wastewater and food waste are already contributing to these goals, however source separation systems have been mentioned as potentially more sustainable in regards to climate change and nutrient recovery. Such claims mainly stem from international literature and this study aimed to investigate the sustainability of source separation system relative to conventional management in a Swedish context.

The study used an attributional life cycle assessment (LCA) to investigate two systems for sanitation management in a hypothetical urban area in Southern Sweden. The study included the management chain from household collection, transport, treatment and finally return of nutrients to farmland or disposal of the residual end-product. Results were calculated for nutrient recovery (phosphorus and nitrogen), climate impact and marine and freshwater eutrophication. In order to make the results more generally comparable only domestic wastewater and food waste was considered; thus excluding stormwater, industrial wastewater and other wastes. Of the two systems, the conventional system included collection of food waste by truck, digestion for biogas and return of the entire wet fraction to farmland as biofertilizer. For domestic wastewater, the conventional system consisted of a single wastewater pipe for toilet wastewater (blackwater) and other domestic wastewater (greywater). The combined stream was treated at a central wastewater treatment plant with primary and secondary (activated sludge biological nitrogen removal) treatment with subsequent anaerobic digestion of the produced sludge. The dewatered sludge was used as soil producer (57%) or returned to farmland (43%), thereby replacing mineral fertilizer. For the source separation system three pipes were considered from each household. One for food waste (collected with food waste disposer), one for separated blackwater (collected with vacuum toilet) and one for the remaining greywater fraction. These streams were treated individually at a wastewater treatment plant, with increased biogas production from anaerobic digestion and nutrient recovery by struvite precipitation and ammonia stripping. The final effluent was polished with tertiary precipitation in order to reach discharge standards. The produced nutrient fractions (struvite and ammonium sulphate) were returned to farmland while the produced sludge was returned to farmland (43%) or used for soil production (57%).
The results showed that the source separation system increased nutrient recovery (0.30-0.38 kg P capita-1 year-1 and 3.10-3.28 kg N capita-1 year-1) and decreased climate impact (21-56 kg CO2-ekv capita-1 year-1). Nutrient recovery was increased by the use of struvite and ammonium sulphate. Climate impact was decreased mainly by the increased biogas production, increased nutrient recovery and less emissions of nitrous oxide from wastewater treatment. For marine eutrophication the systems had an equal impact, dominated by discharge of nitrogen via the effluent from the wastewater treatment plants. For freshwater eutrophication the source separation had an increased impact, mainly due to the extensive use of chemicals for ammonia stripper. In conclusions the study showed that source separation systems could potentially be used to increase nutrient recovery from urban areas to farmland while decreasing climate impact.